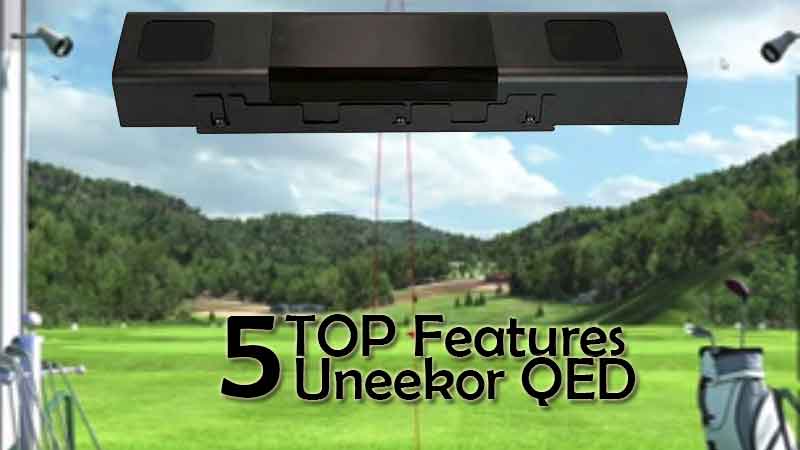 TOP 5 Features Uneekor QED – Today, we’re gonna go through one of our favorite technologies in golf which is Uneekor. Just introduced to the Northeast in May, we’ve done a bunch of simulator installations. Our clients are raving about it, and today, we want to take the same things our clients were raving about, and give that same feedback with the five best features of Uneekor that we’ve seen so far.

Uneekor has a center reference point is such a great feature because righty and Lefty Z’ can hit without having to move the device, or even touch a button. So, the Uneekor no matter what side you’re hitting from is gonna be able to register the golf ball, no need to move the equipment back and forth, no need to press a couple of buttons. If your best friend, your golf buddy happens to be a lefty, and you are a righty, Uneekorn assistant for you, no buttons to switch, less work on your end, means more golf for the both of you.

The next TOP 5 Features Uneekor QED is an awesome feature that comes in the driving range mode. So, I’m gonna take you through a little duel screen here, so you can see exactly what I’m doing on the computer, and how I would get there.

So, I’m gonna go into the peak range mode. Now, we’re in the normal driving range mode which is awesome as it is great views in the background. I don’t think your driving ranges got mountains like that on the back, so great start to this range, but it gets even better our second best feature about Uneekor here is the approach range feature they offer.

I’m gonna go into the menu settings in my driving range, and then her bird head over to approach to see to get a practice that’s even more like the golf course. Now, if my bottom right part of the page here, my cursor is going in the distance, I can pick any distance I want, from 150 yards to 10 yards, all by 10 yards increments. So, it could not be a better practice method, if we go through a few here, we have 150 yards shot which you guys probably know about.

But, if we go to it, 60 yards shot that’s really good to practice for those in-between wedge numbers. It’s just as accurate with these 60 yards shots, and these in-between shots that it is with most companies are worth their full swing, so a little 60 yard shot here, and then the cool feature is that it’s gonna keep wrapping you back around to that 60 yards shot. If you want to keep hitting it, you can sit here, hit 50 up, 50 – 60 yards shots hit until whenever you want to, and then just with the click of a button, we can go up to as close as a 10 yard short rather on this approach range mode.

So, really incredible stuff that it’s going to get you from that close. It gives you all these different options distances you’d want to hit it from and then even on these little 10-yard chip shots it’s unbelievably accurate. The approach range on the Uneekorn software refine is our second best feature of this amazing technology.

Moving right along to our third best feature about Uneekor. We’re gonna go to this amazing mode called the challenge mode. Okay, the challenge is gonna bring your practice right into a city. I don’t know if any of you have hit balls right in the middle of a city before. I personally haven’t, but now I have, because of Uneekor. So, the number three feature is his QED challenge mode.

We’re gonna go with the night mode, and give you a sneak peek at this feature in town. Okay, so here we are now, in this game mode, in this challenge game mode. It’s an amazing atmosphere here, it’s crazy visuals that they have, you go into and if we just hit a shot, we’re going right at our target. It’s gonna show you the multiple different views. I have personally been doing too many push-ups. I went a little deep into the backwater, you’re able to customize all the different yards you want to hit from, and this is a completely interactive game that you and a friend would play.

Coming in at number 4 on our Uneekor top 5 feature list is this short game complex feature. I’m going to go into this mode. In our experience so far with these different technologies usually, the feature that lacks the most are the ones with less ball speed than normal. So, that would be a chip shot, or a putt a lot of these technologies really struggle picking that up. Uneekor is so good, and so accurate that they’ve dedicated a short game area mode.

So, we’re gonna go with the 16.5 yards feature here. We’re gonna go to move and a cool thing about these shots is that you can really dial in to even the ones that you know are only 16 yards long. These are pretty delicate shots that are normally on the course, and you’re able to practice this short game area. You know with peace of mind that this technology unbelievably acts.

So, little 16-yard shots on the way by, you’re gonna notice that there’s a little circle there, hit that one a little deep, but it gives you a really good feel of what would be that gimme putt around the hole, or what’s an easier one, or what’s a good point of reference in there. So, that circle that they give you and as well as just this awesome technology that Uneekor provides are really cool visuals while you’re working on your short game wherever you might be working it on.

Our short game complex is coming in at number 4. I haven’t even shown you the coolest feature of the short game complex. Now, for that feature, I was referring to go into the putting end of this short game complex. A lot of these technologies usually you’d only get to the green, it’s telling you to take automatic two putts a lot of different things to fill that putting void. Uneekor is so accurate and on the point that, they’re giving you your own practice mode for putting.

If we go into this mode, we’re gonna be able to actually hold putts on our Uneekor technology. It’s now similar to the features provided in the approach view of the short game complex. It’s going to give you the same options of different putts that you’d like to practice. We’re gonna go from 15 feet here, you can go all the way up to 62 feet, and even then some more for some straighter customization while you’re in the mode. If we go to 15 feet to start here, now we’re on this putting range complex, it’s an incredible view, as you can see it shows you which direction that putts breaking with this Uneekor feature.

It’s going to be able to line up where you’re supposed to be aiming depending on that break. All you have to worry about is aiming straight, and hit it with the right pace, but an unbelievable finger feature from Uneekor to be able to actually let you practice your putting stroke on your simulator again. Usually, most companies and most technologies, or giving you different ways to pick up or not putt. Uneekor technology is so accurate that they’re even giving a short game area to practice your putting on.

We’re about to announce the number 5 in TOP 5 Features Uneekor QED that we found in this Uneekorn refine that we’ve been so proud to provide so many of our clients for our customized simulator installations. At the price point that it’s at is an unbelievable feature that will actually show you the club coming through the ball. so I’m gonna take my swing like I normally would, and I would, I want you looking at it at the top of the screen. Once, this ball lands, and I pulled that one just a little bit, and the Uneekor gonna let me know just that.

Now, on the screen, there’s gonna be a live video of the swing that I just took. You might have missed that first one, but fortunately, with the Uneekor, you’re able to play that back as many times you would like. So, I had a little clubface open up at impact there which I’ll be able to see now, and it’s also though going to show you so many different numbers. They’re gonna help you with your game.

If you notice that top row, it’s gonna show you your club path, your club speed through impact, the face angle at impact as well as the backspin on your ball, and the sidespin they’re created. Okay, if I exit out of this we’re now gonna see on the right side of the screen again our club speed, our smash factor that’s a ratio between our club, and our ball speed as well as a side angle launch angle of the club took backspin side spin, and face angle numbers as well.

So, all the numbers that you would need to know to really dial in your game, right from the comfort of your own home, or wherever you decide to put your piece of Uneekor technology. Our number 5 feature is going to show you exactly what you’re doing with the clubs through the ball, and how you can change it. Moving forward our number 5 feature of the Uneekor live video after every shot you take. Unbelievable.