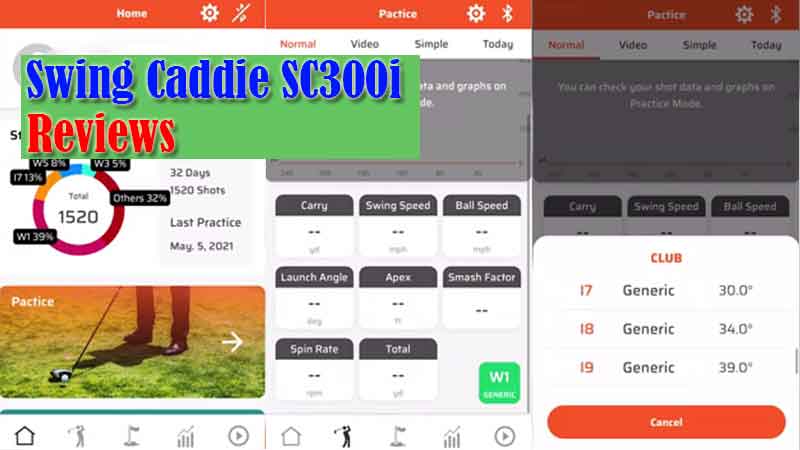 Swing Caddie SC300i Reviews – The brand new released, exciting day, the swing caddy SC300i. It’s an updated version of the sc300 which is here. So, when they went from silver to black, thus I’m wearing all black in, I don’t know, just because this is in black. So, as you may, or may not know, the sc300 was, my let’s say go to launch monitor most affordable launch monitor, the most accurate, most affordable launch monitor, take it with you, put it anywhere you want. It was super reliable.

They’ve improved on that with the sc300i. So, we’re gonna check it out. I’m gonna put it up against trackman, and see how accurate. It is indoors here in my studio because the conditions here are going to be most difficult for an indoor launch monitor. I don’t have much distance between where I’m hitting and the screen. So, it’s under 10 feet and we’re going to see how accurate this bad boy can be indoors under those conditions. If it’s accurate here, it’ll be way more accurate outdoors because it has just longer to track the shot before it does its calculations.

So, when you get your new sc300i, the best thing to do what I found is, delete your current my swing caddy app, delete it off. If you had the old one then reinstall it. So, you don’t have any issues. Okay, that’s just what I had to do to make sure everything was synced up working properly. So, you have just your normal practice mode, you can go in, and select your club here, and then just go and hit your shots, you’re good to go.

What’s cool is? You have this target mode, a little more intense practice mode. We’ll get into that something they’ve added here which we’re going to test out is the video mode. You could just go into the video mode, and you can video your swing, and then it will give you some numbers right there as you’re hitting. So, we’ll test that out as well, let’s first just dive in. We’ll start with an 8-iron here, just practice mode 8 iron, and we’ll compare it to launch trackman, and see if it’s close, not close, you get the idea.

First, horrible shot, no warm-up, out of the gate trackman, this is Carrie distance. We’re looking at 133 for swing caddie, which was a bad shot, and 127 for trackman, pretty close. That was a good shot. Okay, so those numbers are pretty spot on. We got 152 from swing caddy, 151 carry on trackman we’ve got. Let’s see swing speed is 81 trackman, 81 swing caddie, right on the money spin rate. Now, in the app on swing caddie, you get a spin rate. This says 6790, trackman says 6500, so pretty close.

Ball speed is spot on, loving that, is it another 8 iron, make sure we’re good. Okay, swing caddy says 142 carry, trackman says 139. It’s within a couple of yards, the spin rate is 61.50 on swing caddie, and 6610. There it’s pretty accurate, ball speed is perfect on both of them. They match up perfectly, the smash factor is very close as well. So, with the eight irons, we’re looking really good. I’m actually quite surprised because typically that the swing caddies indoor didn’t work out great like outdoor in the net.

It was fine, but when I brought it indoors, it wasn’t as accurate as I would hope. They’ve definitely done some improvements to make it a lot more indoor friendly. So, it’s good with an 8-iron.

Now, how about the driver. Okay, so this is driver swing. We’ve got 252 swing caddie, and we’ve got 244 carry on trackman. We have a smash factor of 149, both of them are the same. Spin rates are totally different here, so, I’m getting a 2,800 spin rate swing caddie, a 1,630 swing spin rate trackman, and the height would be that’s a little. I mean, it’s going to be higher on swing candy. So spin rate’s off, but the carry distance is very accurate. In the swing speeds right on the money. I’m not really worried about the spin rate being accurate on my little portable device.

So, for the home affordable version, this is incredibly accurate. Always been a big fan. Now, with the new features of the video, this target practice mode is new and improved. So that’s really nice, I love that, and I just love the layout, the look, how simple this is to use, and not once during this article did, I ever get a non-reading shot from the sc300i. All shots were recorded, I think the spin rate is off, and it was off in the previous version.

It’s better, but again it’s not up there with your super multi-thousand dollars launch monitors. So, that’s always going to be a challenge. I do like that they have it. I wouldn’t rely on the spin rate of the sc300i but the other features are pretty spot on. So, when it comes to portable affordable launch monitors that you can easily read the screen in the bright sunlight, or ignores. I highly recommend you check out the swing caddy sc300i, a fantastic unit.