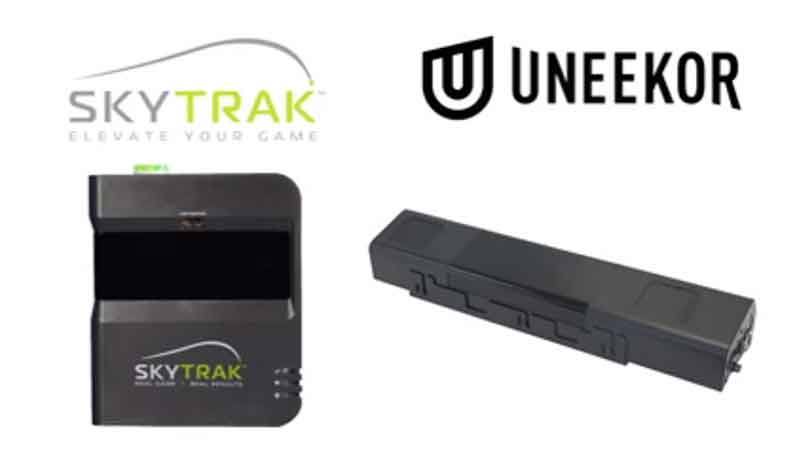 So, we’ve got that $5,000 difference between the two of them, and I think today, I probably want you to get an understanding of what creates that difference or what you get for that five thousand dollars. We’ll break down that five grand, we’ll hit some shots, we’ll compare some data, and what software can go with those as well.

So, let’s get into it a little bit. We start talking about these five thousand dollar differences. The things I want to mention right away would be estimated versus measured. So, with the Skytrak everything’s at an estimated distance, except for the ball speed and the backspin distance is estimated. The club stuff is all estimated right you have to delay, and then, it’s photometric. So, it’s literally only taking pictures.

You’ve got your club path where there is a video of the club coming back through it, just like we saw with the EXO. The QED’s is the same thing, so it’s great because you can actually see how I hit that off the toe, and just watch the path, and you see how fast the clubface closes and all that other stuff like from a teaching standpoint, that’s awesome when it comes to the data.

You get a little bit different data screen, where the Skytrak has your shot history, and it pumps out your data. You don’t really get that same kind of numeric display, is a little different. Actually, Skytrak probably looks a little bit better but you just don’t get as much data. So, you’re looking at your face to path, your face angle, your flight time, your landing angles, stuff like that, you get some of that with Skytrak.

This is done just a little bit differently, a little bit more of a physics-style panel. Okay, so when we talk about software for these two units, the cool part about either one of these is they’re very versatile when it comes to software. Obviously, it depends on what package you get. With Skytrak, if you get the basic Skytrak, you get the driving range, and that’s it. You don’t get anything fancy with it, or anything else.

We can put a link up to that as well. What those golf courses are? Because it’s actually a really cool app. I don’t like the way the ball lands and stuff like that, necessarily, but it’s really cool to watch because they actually take a video of pebble beach, or St. Andrews is your ball’s moving along. So you’re moving with it. It’s a really cool app. If you want to do a single-player app but with the QED, you have the refined software which is got skills challenges, short games, and stuff like that, as you have with the game improvement plan from Skytrak.

And you also get five golf courses, and then the succeed is the next level of that. So, where refines a thousand dollars extra, succeeds two thousand dollars extra, and you get 20 golf courses. So, it’s a little bit different. You’re not going to know any of those golf courses, unless, you played a lot of golf in Asia very versatile. They can use a lot of different software, obviously, there are different costs to that software. They can range anywhere from like 300 a year for 27 courses for E6 to 895 from Skytrak with the TGC, or we charge 950 for TGC, and that has a hundred thousand plus courses of creative golf.

I’m not sure the exact number, but it’s right around a thousand courses as well, and it’s somewhere in that 700 range. There’s plenty of software that you can use for these, my favorite is TGC. We also use E6 a lot which has pretty good physics on it, has great graphics. So, those are the two really competitive ones that I’ll say that most people get. I’ll leave that up to you.

We’re gonna hit five balls with just a seven iron. I’m not going to compare drivers and wedges and stuff like that. Today, part of the reason is that we don’t see a dramatic change in the numbers between them. So, we just want to compare seven iron today, kind of give you an idea of what you see differences, what we see different as far as the numbers go. Some Skytrak will embellish, some QED will embellish, and we just have to figure that out.

All right, so we’ve got the data up right now, and you know, I think the big thing I want to focus on in this sense is how similar the data is. Actually, is no matter what video we do, what comparison we do, the data always compares very favorably between all these launch monitors. We’re just looking at carry distances, very similar within 0.7 yards, ball speed is very similar within one mile an hour, club speed very similar within 1.2 miles an hour, side spin with the Skytrak is 1400, or it’s not 1400 more, it’s 400 more right which is a lot of sidespins.

I mean that’s an eight yards draw right there in itself, and then for the QED, the one number that they don’t do really well is a launch angle. I never feel like the launch angle is great on the QED or smash factor. It’s just the algorithm is wrong within the software. Those are the big ones backspin numbers are very similar as well. They’re within 200 RPMs which isn’t dramatic for a backspin number, but I think that’s the one thing I want to reiterate over and over again.

SkyTrak Golf Simulator
MSRP Price: $2,199.99
Your Price: $1,995.00
The SkyTrak is among the most accurate launch monitors available to everyday golfers. Head to head studies shows SkyTrak is 98% as accurate as the Trackman, at a fraction of the cost.
Buy Product
View Specifications

This is how similar the data actually is, so in summation, I think that if you’re doing a true versus, you’re going to pick a winner. I’m picking a QED, I know it’s five grand more, I know that it requires a gaming pc to run it, I know that it’s a lot more expensive. I love that thing, I use it every day. I love Skytrak, I mean the Skytrak is fantastic, the thing is really good for home users. It’s affordable, it’s accurate, it can be a little finicky from time to time really, but it still gives you good data and it’s compatible with so much software. It’s a great option for my money.

I’m taking a QED, I can teach with it, I can look at videos on it. I know I trust the data. I don’t care about the launch angle. I know what my launch angle is, I know that it’s about two degrees high on that thing. I’m aware of that, you can be aware of that now, but it’s consistent, I’ve had this thing up since July. It’s probably missed 10 shots other than shanks or tops, but it’s probably missed about 10 shots for me, and I think that when it did.

I needed to clean it off. I needed to reset it. I probably hadn’t turned it off for a couple of weeks, and I just needed to reset it like you do electronics. So now, I turn it off every day, I don’t remember the last time I missed the shot, I really don’t. I love it, if I was to put one in my house that’s what I’m putting in my house even more than an EXO like. I love the EXO for like a commercial setting, and it’s got the cloud-based technology.

Skytrak VS Uneekor QED – It’d be great for a teaching center. I like the QED, it’s simple, I turn it on, I put on TGC or E6, and I just go and I can play a ton of golf courses. I trust the data, I play rounds on that just like I do when I play golf like I hit knock down shots, I hit flop shots, it records all those shots. Skytrak, Mevo+, some of the other ones, they just don’t get that same value out of it, and one more thing, this thing is awesome when it comes to short game and putting. I feel like my putting is actually improved because of the QED which sounds crazy, but it’s fantastic with a short game and putting. So, all day, every day for me, I’m picking a QED, love the Skytrak, love them EXO, love the quad, I love the QED, I think that it’s just a fantastic product that is reliable consistent and I’m going to pick it all day long.