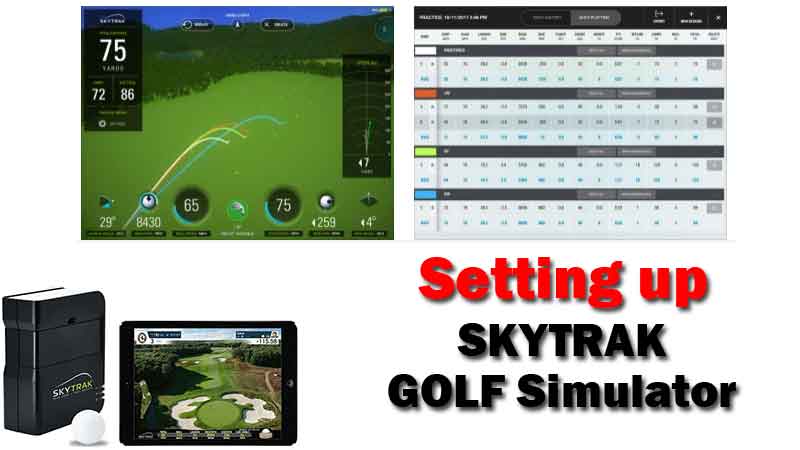 Setting up SKYTRAK GOLF Simulator – Today is a super exciting day. Today is the day that I get another golf simulator. I’ll tell you a quick story, and then we’ll unpackage this baby and fire up, see how she works. So, last year I actually had a golf simulator, and it was pretty sweet. And around Christmas time, I was forced to let it go, and so I’ve been without one since I guess the beginning of December. One of the guys that I worked with, saw how bummed I was not being able to hit golf balls at work on a regular basis. So, he did something really sweet, and he actually bought me one. And today is the day that it comes in, and we’re gonna open it up together, and see what she’s got.

Now, let’s take a peek inside this box. So, since I had another golf simulator before my space is still prepped for it, it was just the actual launch monitor that reads the ball data that I ended up getting rid of. So, we’ve got a nice big screen, this was originally a sim in the box setup from foresight sports, got my hitting mat,  impact screen, got my putting surface over there, even got my computer over here with some camera set up.  So, we can do a swing analysis. But, all we’ve been missing is the actual launch monitor, and that’s what we’re going to be setting up today.

So, taking a peek inside, we’ve got a SkyTrak launch monitor. I’ve heard lots of good things about this baby but I’ve never actually used one, or seen how it works, and then, I believe this is a metal protective case to protect you from all the nasty shanks.

So, you can use the SkyTrak with a couple of different simulator software. I’m just gonna set it up using my iPad. We’re gonna go to the app store, find the app titled SkyTrak, and we’re gonna get that. It’s free. How about that? Once, we get that downloaded, we’re going to go into the app. Create an account, and now, we’re registered. It’s time to power this thing ON and try to get it to sync up. All right, so now the app is ready to go. So, we’re going to take our SkyTrak unit, and place this on the hitting mat, hook it up to power stick it to the app.

I’m going to try to place it somewhere. I’m assuming, it just needs to be straight. I haven’t gotten that far in the instructions yet, and even though, this does have a battery. I’m going to hook it up to a power cord for now. Since the first time I’ve used it, and get it juiced up, I don’t know if you can see it, but I’ve got the power button right here, come on press it, let’s see you got lights seems like she’s working. Let’s try to connect it to the app. So, right now, I am trying to connect the iPad to the SkyTrak with a direct wi-fi connection, and then we’re going to get it connected to my home network and should be able to start using it.

At that point myself to register it, or something. We’ll see. Well, this is neat, we just got our little red aim dot here. So, something’s happening, iPad still says “please wait” but that’s okay. I’m getting pretty hyped now, by the way, while we’re waiting for that, you need to know this is not going to be a permanent solution. We’re actually. We’ve got this cabinet here, we’re going to put a gaming computer inside this cabinet. We’re going to disguise all these power cables, probably, run it up under the cabinet, and then be projecting our images over there.

So, at this point, I’m just getting a little bit impatient. I keep you know clicking out of things. I’m ready to hit some golf balls, but the iPad says right now checking license files. Hopefully, soon this will be ready, and we’ll be playing. I’m going to show you something else. I’m really stoked about it, check out the Kirkland ks1 putter.

I’ve heard a lot of things seen, a lot of people do reviews. So, I thought, I had to pick one up, and I want to see how it compares to the putter that I currently have in my bag which is a little Scotty Cameron Newport that sucker right there. I’m not sure if the ks1 is gonna blow my mind like it has so many other people. But, we’re gonna give it a roll, put it up against the Scotty. See how she does, and speak of the Devil.

So, we’ll get to test it out on the iPad and the computer. I had to stop with the setup because we had to download all these files like the golf club, and that’s TGC 2019. I had to download the SkyTrak software on the computer, get the licensing stuff set up. It was taking a little while, so we’re finishing it up today. I got all the license stuff, figured out, and now we’re gonna align it, and hit some balls.

There’s an alignment system built into this SkyTrak unit, but basically, the unit is just supposed to be pointed at the screen. I guess sort of parallel to the centerline, but we’re going to set up an alignment stick. So, that it’s in line with the centerline, roll a couple of putts, and make sure. That it’s going straight then maybe, we’ll hit some other clips. We’ve got our alignment stick set up, pretty much straight down the centerline where this laser goes there. That is the spot to place the ball, and then we’ve got the target line that goes straight down.

We’re just going to try to roll the ball over that and see how inline it is. So, I’m hitting the 9 iron carried about 150. It should be perfect to land, and roll on. See if the distance is right. I don’t want a little fat, that sounded nice. It’s a little fade 148 carry and hit that with some spin too. Let’s look at the backspin numbers 9,400. It spun back a little bit when it landed. That’s pretty spot-on.

So far, it’s pretty nice. It measures distance really well. The first one hit pretty fat. So, I don’t know if that one was gonna be accurate, but the other two, seemed spot on. Right now, he’s got three shots in averaging 143 yards but that first one like I said was fat, and it was not a typical shot. I mean that shot shape is definitely usually what I’d see him play starts to the left curves back to the right.

Well, let’s hit a couple more, looking at the shot display, literally averaging exactly 150 yards. So, that carries distance, it’s pretty strong with an average of 9500 – 9600 RPMs of backspin. So far, it seems pretty accurate to me. I mean we got his numbers in from a Trackman 4. So, I feel like they’re pretty comparable well.