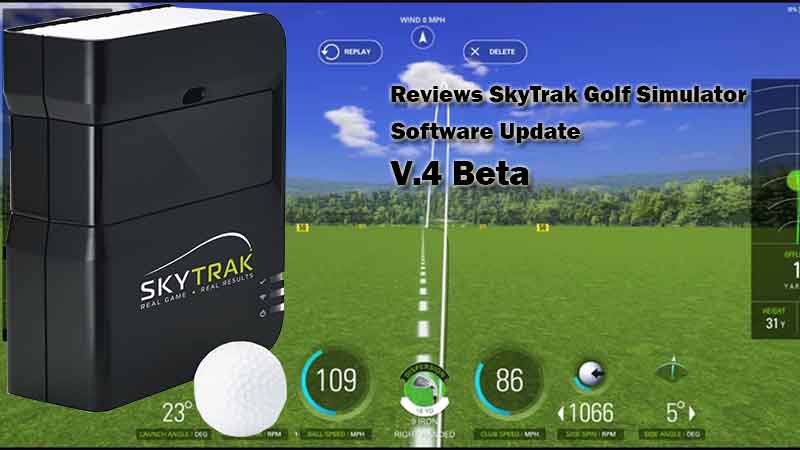 Reviews SkyTrak Golf Simulator Software Update – Today with the SkyTrak golf launch monitor. This is an optically based or camera-based golf launch monitor that sits aside the ball. And if you guys remember, we actually had a SkyTrak in the GSV studio for a little while, but that was a loaner unit since then I’ve had so many viewers reach out that said they wanted to see more of the SkyTrak.

A lot of them don’t own one yet, or they’re trying to upgrade from other launch monitors that they might have. They want to see more of the SkyTrak, and so, we went out, we bought a brand new SkyTrak. I actually added the game improvement plan and play plan. So, we’re gonna have a lot to show you, but today’s is going to be really cool because they actually just released a version 4.0 beta of their Skytrak software.

SkyTrak Net Return Fiberbuilt Studio
Price: $3,995.95
SkyTrak utilizes the same technology found in other commercial launch monitors but at an affordable price, making it available to more fitters, teachers, and college programs. The key here is ACCURACY. SkyTrak provides REAL launch data that helps you find the right club, the right swing, and know your game inside and out.
Check On Store

That’s the base software that comes with your Skytrak, and we actually have some of those enhanced features because we did the game improvement plan. So, we’re going to kind of give you a brief overview of that today.

We’re in the practice session. So, we’ll make sure we cover more in segmented videos, but I want to kind of give you a first look at this 4.0 release. Now, let me just go over the release notes really quick. So, they improved the range graphics, so this is actually unity-based, you can really see that things have been fine-tuned.

They’re looking really nice. They improved tracers and camera views, and we’ll show you some of those different camera views. They actually limited the support characters and profile names, so just understand that they restricted altitude and temperature to realistic numbers. I think it was kind of unlimited and unrealistic to where you could adjust those.

And now, that’s in a realistic value range. Okay, so they fixed a duplicate club bug in bag management,  so understand that has been fixed, and they also fixed the bag mapping bug in the offline mode. And then they also had miscellaneous bugs, and fixes, and improvements. Okay, so let’s go ahead and dive right in.

We’ll hit a couple of shots, give you guys a demonstration of the Skytrak golf launch monitor, and this new 4.0 version of Skytrak software. So, I’m going to kind of shrink my camera down, I notice how it’s off-centered from the bottom because I kind of wanted you to be able to see the launch angle. And I think, if I just shrink it right here, you’ll be able to see the launch angle. You can actually even see the practice area button that I’ll actually be using.

So, first thing first, let’s just go to the settings, the upper right you have your shot history which once we have some shots. We’ll dive into that numeric display is where you can pull up all the different numbers,  you can see, I actually hit a couple of test shots. So, there are some numbers in there. That’s if you’re diving into those numbers, there’s a shot optimizer actually.

So, depending on the club that you’ve defined, it will actually give you a launch angle, range, backspin range, descent angle range that way you can kind of get those optimal numbers for each club. I think that’s pretty cool.

Next, would be session settings. If you go in there, this is a different camera angle I was talking about. Now, I like to follow the ball, I’ll give you kind of a different look at some things. The first person just stands behind the ball, the dynamic is behind the ball, and then it goes up and kind of shows you a side view of it landing on the range down.

The range is where you see the ball coming at you. All right, in 45 degrees, obviously, a 45 degree look all right, and then there’s actually an offset available as well. So, tracers single shot or can show five at a time, or even 50 at a time, graphics were at maximum, but just understand that there is an available range depending on how powerful your PC is.

That’s pretty nice, I have a carry set for my main distance and shot dispersion. I feel like the carry distance is always something, I just want to focus on because you could be in any type of environment landing downhill, or hard greens, whatever, maybe. I’m right-handed, and I do like seeing a side spin number, it depends on what I’m doing.

Sometimes, I use spin access as well as far as conditions go. I have pretty much everything set neutral,  but I have the altitude to my local altitude and just a standard temperature of 75. All right, so you understand all the settings, and we’ll kind of dive into that a little more as we get started here.

But, let’s first go into the practice area, you can see there are greens and fairways available. Since we’re going to be hitting a couple of 9 irons for you, we’ll grab a target, and 140 yards is perfect. You can see,  you can have different sizes, and there’s actually medium and hard. I should say shapes and sizes. So, we’re just going to stick to a standard green.

I think that’s great when you’re out on the range, and then we’ll just go ahead and hit apply. And you’ll see a flag pops up, down there, and it wants us to select our club that we’ll be using. So, I’m going to be using a 9 iron. So, we’ve got that selected and at this stage, we’re ready to hit some shots. So, grab my nine iron here, we’re playing with a pro v1 just so you understand we’ve already lined up-leveled, checked the roll, and everything using the software right on the home page.

They have a tool available, you know, you can see both roll and tilt of the unit, and they actually have an alignment tool that gives you 2 red dots where you can check the alignment to the target. And then, you just do a couple of tests to make sure that’s all calibrated correctly. And it looks like it is for us. So Pro V1 definitely wants to take the logo and face it towards the unit. That’s the best practice that they recommend that allows those cameras to actually have some contrast on the ball, and see something moving. That’s how they’re going to measure the spin.

You can watch all the SkyTrak setting on this video below.

Now, just so you understand, there’s a lot more to the software I try, not to make these articles too long. I mean we’re already working on 15 minutes with what we showed you here, and I’ll dive into the different sections that they have. Okay, this is the practice session, and then I’m also going to show you the play software that they have which is WGT.  So, it’s a really affordable simulation software that they have for Skytrak.