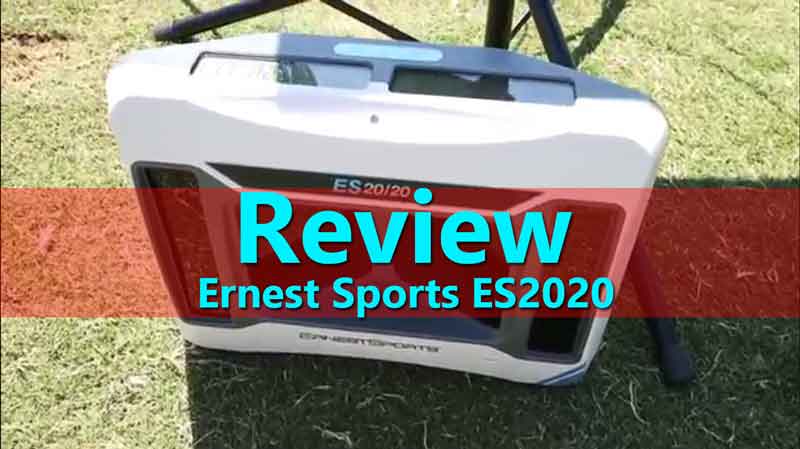 Review Ernest Sports ES2020 – There are going to be a lot of people out there on the market who are going to question this device, and Ernest Sports not long ago released the ES 16 launch monitor. Now, it’s a great device for using indoors, but it’s miserable when it comes to hitting shots outdoors. It’s because of direct sunlight. Now, I’m all the way over here in Australia, and as I said, I’ve got the ES 20/20 here to test and to give you my point of view on this device.

Now, this device is going to sell for probably 10K roughly around that AUD over here in Australia. First of all, this is going to be more of a preview. I’ve only had it for three days and have been putting it through its paces for the last three days. Now, as a personal opinion to the look of the device. It looks absolutely amazing for a device that’s going to be about 10 to 15 grand cheaper than its competitors of Trackman and GC quad.

It’s a pretty impressive little device. It’s going to be more on the market or competing with what we call FlightScope or everyone knows what FlightScope is. But it’s going to be on the FlightScope market price range, and I’m talking about flight scope X2. If we’re talking FlightScope X3 or X2, I believe it’s called now it’s a lot cheaper. So, for bang for your buck, this device is going to be a very good device.

Now, as I said, I’ve had it for three days. I tried it a couple of days at a TaylorMade demo day, and it worked really well. I’ve been using it here on the driving range, and it’s performed really well. The delay between ball strike and actual numbers coming up on the screens about a second, and therewith massive delays with the previous device of the ES6 thing, but responsiveness is very good.

Ernest Sports ES20/20
Price: $7,000.00
With more precision, enhanced doppler technology, and an onboard LCD display this launch monitor is fully functional for both indoor and outdoor simulation. Get in-depth shot statistics with the ES Golf App or play full golf simulation.
Buy Product
View On Store

Now, as you can see right now, I’m actually out here on the second hole in our Short Course at Lake Cane Up, and I’m actually using our range ball out here which is a yellow golf ball. And this device is having no problems picking up that golf ball. When I was doing the demo day out at Malins the other day, I was using the yellow golf ball as well, and it wasn’t having any problems. So, for all the sports doubters out there, so far I can honestly say so good.

This device is actually working, and as you can see right now, it’s pretty bright out here at Perth, and I’ve put the golf ball in front of it, and it’s picking it up straight away. Anyway, enough of me talking, actually there is one thing I do want to mention. This device actually puts out a little bit of a sound. It’s actually like you’ve got your computer sitting next to you, and it’s on idle to bear with me for a sec. It does sound like you’ve got a little mini-computer next to you, but as I said, it’s not loud. That it’s going to annoy you, but I’m just going to make you aware of it, simply because of the fact that when you’re using a GC quad or a TrackMan, or a FlightScope doesn’t admit any noise.  This does actually put out a little bit of a sound just something there for food-for-thought.

Anyway, I’m gonna hit a couple of shots, you’re going to see the numbers come up on the screen. Now, from the testing, I did from the last two, three days. The numbers that were coming up were very relative to what shots I was hitting because you’re not going to be able to see the shots. Because when you’re in outdoor mode, it only comes up with numbers. When you switch to indoor mode then you’re hitting, simulator comes up anyway.

Like I said, I’m gonna hit a couple of shots, will see the numbers come up on the screen, and you can make your own opinion of what I’ll tell you what the shots are done. So, it’s already ready to go, and when you know this is ready to go because you’ll see an image coming up on the screen. A red ring will form and that note means it’s ready to go. It also comes up with a green light at the top, but you can’t really see that green light too well in broad daylight.

The ring that comes up on the screen, that comes up solid to let me know that it’s ready to hit. Now, I’m just going to quickly switch the club to 7-iron, and you can see me doing that. It tells the machine that’s on a 7-iron, it’s just recalibrated itself, balls back in position again, the red ring forms, we’re good to go.

Let’s have a hit, there we go, numbers are coming up on the screen. They’re a little bit more of a delay than I expected. That first one, but let’s have a look, clubface was open, and funny enough, I hit a bit of it to the right, and it went right. So, 142, 149, that’s pretty accurate for me with my distance, or I put another ball there, it’s already locked and loaded, it’s ready to go.

Review Ernest Sports ES2020 – So, there’s not too much of a delay there. Now, I did speak to Jim the other day, they said they’re going to try and make that even quicker in recognizing the golf ball clubface to the path, one point to close again same distance. Now, that one did go a little bit left in comparison to the last one, and again, as I said, the numbers are coming up real quick.

It’s roughly a quarter of the club away from the distance. I can actually move it to almost half a club away from the monitor, and it’s still picking up the golf ball. So, I’m quite a distance from the Machine right now. Let’s have a hit, and there we go, numbers coming up on the screen. As you can see, straight away in broad daylight, the Ernest Sports 2020 is working.

Review Ernest Sports ES2020 – I can’t complain about the device, it’s performing the way I expect it to perform, and as I said, you can actually get quite a distance away from the machine, and it still picks up the numbers.