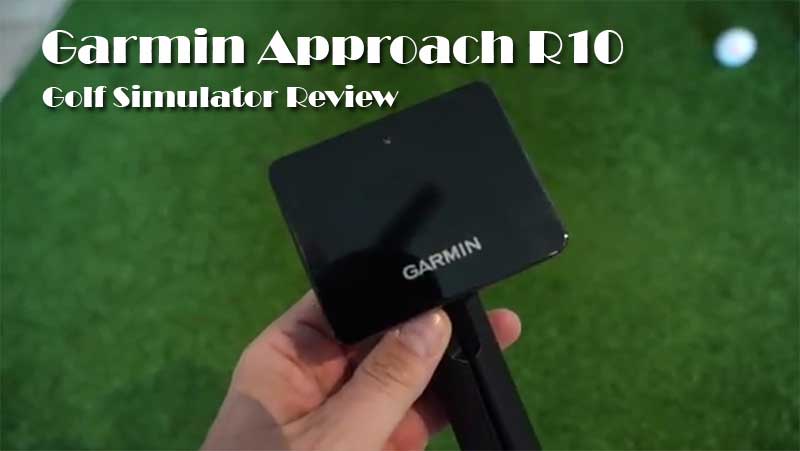 Garmin Approach R10 Golf Simulator Review – This is the Garmin R10, Which I think might just change the world of golf. Let’s get into it. What if I told you that you went shopping for a golf simulator, you found the perfect device, and the sales clerk says “Oh, but, wait it’s 70 off, that’s exactly what the Garmin r10 is about to do. Because this is a launch monitor, a full golf simulator, and it’s 70 off the price of its competitors which absolutely blows my mind. In fact, I think they might actually have made a mistake in the way they priced it, and if I was them, it would be priced a little bit higher, but their loss is my gain and I’m happy as can be.

All right, let’s go through the features of this incredible device. The Garmin R10 is first and foremost a launch monitor for indoor and outdoor use. So, it’s going to give you all of the data including side spin that you’ll need to know exactly what you did when you strike the club, whether you’re out on the range, or you’re indoors.

One of the really nice features is that all of your session data is saved. In fact, every single shot that you take is visualized out on the range, as well as you can bounce in and look at the data for that specific shot at the same time. This is a full golf simulator with access to 42,000 golf courses. So, you can play anywhere from your local course to your dream course. When you launch home team hero, you’ll come to a screen that shows you the courses you played as well as the courses around you.

And you can actually type in just about any course in the world, and you’ll find it. Once you download that course, it’s now saved, and you can play it. This is how quick it is, all of a sudden, I’m standing at the first tee of whistling straights, and it’s almost exactly what it looked like when I was there just a couple of months ago. Now, the animations on the home tee hero are going to be a little bit more cartoony, but if you want a more realistic simulation environment, or even be able to set up a projector and a screen, and do the whole deal, you can actually use the E6 connect system which I tried, and it worked flawlessly.

The next feature for me is, what I mentioned at the start, but it’s the form factor. This thing is as powerful as devices that go for two thousand dollars, not only is it a fraction of the price, but it’s like a quarter or less of the size. Now, one of the things that impress me, most about the Garmin R10 is literally how easy it is to set up. It’s unreal, it’s unlike anything I’ve ever seen. There’s one button back here to press, you see a green light to know that you’re ON, then you take the tripod, you stick it to the back. It’s magnetic, it locks right into place, releases the three legs, pops it down six feet behind where you’re swinging, and you’re ready to go.

Another amazing feature of the R10 is the fact that you can record your swings with the shot data overlaid, and we’ve seen this with other devices. But, I gotta tell you, the Garmin does it really well and makes it so easy with some devices. It’s a little clunky, you’ve got to tell it to record with this. You literally turn ON the recording, and as you take a shot, it automatically knows you took a shot and saves that recording into the device. I don’t know how it works, it’s some sort of alchemy, but it just works and it works better than any of these other devices that I’ve looked at in the past year or two.

Another huge selling point for me is the fact that this thing has over 10 hours of battery life, which got to tell you is an addition. Because, so many pieces of golf technology might last you an hour or two hours, maybe a session or two. This thing, I’ve had for an entire weekend, and haven’t had to recharge it. I’ve taken it outside, I’ve used it indoors, I’ve turned it ON and OFF and messed with the app everything, it’s still yet to need a charge which I’m tickled pink about.

Now, let’s get into the price point and the subscription model that Garmin has built into it, R10. The price of this thing at the time of me making this article, the retail price is 599 dollars, like I said, a fraction of the price of things like the Skytrak or the Mevo+ which are going to be more like 2000 dollars. So, to have a full golf simulator, a full launch monitor, and all those features packed into this device for 599. I gotta say, I don’t think a better value exists, and I think Garmin really has underpriced this device.

If I was sitting in the boardroom and pricing this, I’d say this is at least an 800 or 900 dollar device at the very minimum. And I think you could easily make the argument that this thing is worth 1500 dollars or even 200 dollars. 599 for what this thing can do is it I’m speechless. Now, out of the box, you will have access to the driving range feature, and if you were to connect into something like E6 which has its own subscription, you would be able to do that, but if you want to access home hero get those 42,000 courses available to you, as well as the option to play folks online with the weekly tournament feature. That is going to be a subscription.

Right now, as of the time of me making this article, Garmin has that priced at 9.99 per month, or you can take the annual subscription route and pay 99.99 for the entire year. For me, it’s an absolute no-brainer to go ahead and get the subscription, because that’s what takes it from basically a 500 golf launch monitor to something that’s going to cost you multiple thousands of dollars to have that full home simulation built-in.

All right, so let’s talk about the competition for this little unit here, the Garmin R10. I would say, the main competition is going to come from other golf launch monitors, you’ve got the Rapsodo, you’ve got the Swing Caddy, you’ve got the FlightScope Mevo, the Garmin g80 which is also in that category. But when you take into the fact, this is also a golf simulator, now the competition for this is also a Skytrak as well as a Mevo+. Those things are sitting at 2000 dollars, give or take, and as we saw last year, they were often on backorder. Because they were so popular.

Well, I think the same thing is going to happen with the R10. I cannot imagine they’ll be able to produce enough of these things. Because it’s competing with things that are more expensive. This little unit is punching far above its weight. Now, in my mind, there’s no such thing as a perfect device. So, this is the perfect time to talk about drawbacks that I saw while testing this. Both outdoors and indoors, for the most part, it performed spectacularly. But there are a few small issues that I’d like to see addressed, and they might be addressed with a future firmware update.

Because, actually in real-time, while I was testing this unit out, they rolled out a firmware update, and solved some of the initial issues that I found. But, here we go, here’s what I see that could possibly be improved.

Garmin Approach R10 Golf Simulator Review – The first issue to me is the fact, there’s no clear battery indicator on this device itself. I told you, it has a 10 hour plus battery. So, in most cases, you’re probably not going to have to worry, as long as you charged it the night before. But if you’re going days, or maybe weeks without charging this thing, and then you take it out there, the only place to actually see battery life is within the app itself. And to me, it’s just not that clear. I think, it could be better, and in fact, in a perfect world, I’d love to see some sort of indicator, or maybe some sort of flashing light back here, maybe.  We’ll see that as this R-line evolves.

Now, the second issue that I encountered has to do with my club waggle. There were times where it actually did not pick up my shot because it was ready to go, I sort of did a little club waggle, and then all of a sudden, it just didn’t pick up the shot. It didn’t seem to happen out at the range, however, it did happen in a backyard environment, when we were hitting up against a net, and it also happened in the indoor environment when I set up my little golf simulator in the living room. I think that’s an issue that a firmware update will be able to address. So, I’m not too worried about it, but that’s something that definitely I would like to see fixed. Because as a golfer, I’ve got a specific rhythm, and it sort of messed that up, I had to look back, make sure I was okay. I got the green light, and I was good to go.

Garmin R10 Golf Launch Monitor
Price: $599.99
Are you looking for a quality training aid to help improve your golf game? Want to have fun while you practice and track your stats? Look no further than the new Garmin Approach ® R10. The portable golf launch monitor plays where you practice – inside your home, out in the backyard, and even on the driving range.
Buy Product
View Specifications

Garmin Approach R10 Golf Simulator Review – One other dropback that’s not really a huge drawback for me, but it might be for others who are using this as a full golf simulator is a fact that you’re really not able to do any putting with this. What you’ll do is within E6 or within the Garmin home tea hero. Basically, you just hit it onto the green, and there’s no putting out, and you move on to the next hole. For me, that’s completely fine, because I’m using this, more to practice my drives, and my approach shots. But if you are one of those people who wants a full golf simulation experience, and you want the putting and everything else, you’re not really going to get that with the Garmin R10. Very rare that this happens, but this is going to get a full 5.5 out of me.

Is it the perfect device? It’s absolutely not the perfect device, and I told you, some of the drawbacks, I think this thing has. But, for where it’s priced, and what it can do, or what it promises to do even better in the future. I think, right now halfway through the year of 2021, this might be the finest piece of golf technology that your average joe can get their hands on. I think it’s incredible. I will absolutely be buying one of these.