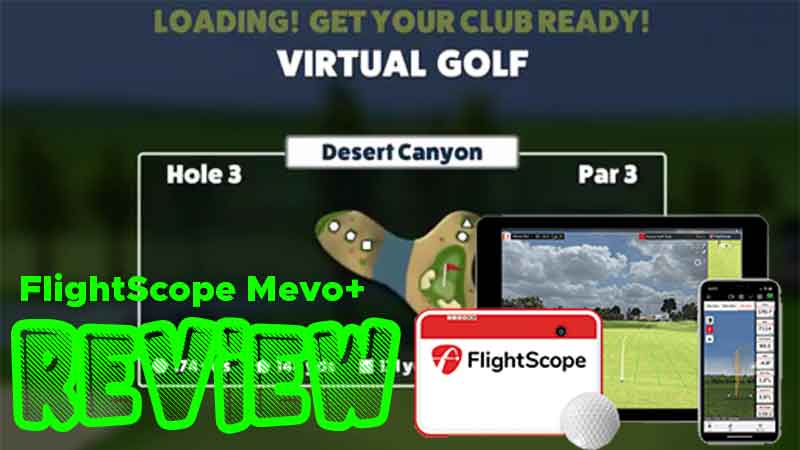 Flightscope Mevo+ Review – So, version 1.8.0, it’s available for download. You can actually download this update now. So, let’s go over the update details really quick, and then we’re going to dive in, and I’ll show you some of the apps. In virtual golf, players can now create teams, so what they call a better ball, or best ball scrambles, alternate shot, all supported team structures, and there’s actually a skins match format that’s been added. Really cool stuff, but here’s something a lot of people are asking for, they only had two courses before. They’ve added a third course, it’s called a desert canyon.

We’re going to show that to you today. Mulligans have been added, I know a lot of people are asking about that depending on what’s going on. If you want mulligans available, guess what, they’ve been added, they’re really listening to the users, listening to that user feedback, and acting on it which I think is very cool. So, offline mode, I know this is important for a lot of people, if you don’t have internet available, you can still use the app, say you’re out at the range, and you don’t have internet. Well guess what, there’s offline mode available now, they’ve added that I think that’s fantastic. In some new settings, a lot of people don’t have a center-aligned simulator. They have to use an offset environment.

Okay, we’re hitting off to the side, they have projector alignment. Now, you can actually get that feeling to where you’re lined up correctly in an offset environment. All right, so tilt and roll have actually been added to the app. You don’t have to worry about it, tilt and roll outside of it then go back in. You don’t use 12 degrees for awesome golf. It’s actually the full tilt for a full shot only, there’s no putting. Okay, so just understand that, and then as far as general settings go, or general updates, they updated outdoor processing and they eliminated wind for the spin access, and then bug fixes.

They just had some general bug fixes and performance improvements, and then if you do get an estimated spin number, they’re actually going to show that in italics. You actually can get an indication if there was an estimated spin versus measured spin from your launch monitor. So, other than that, we’re good to go. We can dive right into the app, and I can show you guys what it looks like. So, I’m not going to go over the settings and everything, because I think, it’s pretty self-explanatory.

We’re going to go into a virtual golf desert canyon. Now, check this out, it says hold on to your hats, big hills, high winds, and narrow fairways. So, this is kind of the opposite of spring park hills where it says wide fairways, large greens, and it says the light wind. So, here we go, let’s go out there. I’ve checked out a few of these holes, and if you go to, like three, look at this cool par three, there’s a par four that I think we can get through pretty fast here.

I’ll show you guys a couple of holes really quick, I like how you can, just select what holes you want to play, you can see there’s the match playing skins and scramble. And the best ball alternative shot has all been added to the shot countdown timer. We’re not going to use, and mulligans, if you want them, there you go. So, we’re good to go there. We’re going to do pentagon that’s where if you drive the ball up to about 280 yards. They do have tips available as well when you jump out, like I do, without any warm-up.

We don’t need to be swinging our back out of place, so cool, little flyover. Check out this part three, I figured it would be a great hole to demonstrate to you, and here’s what’s funny is, it’s crazy wind usually, yes, there you go, 13 miles an hour right in the headwind. So, what’s cool is sometimes it’s coming off the side, you have to adjust depending on what’s going on.

Flightscope Mevo+ Review – Now, let’s talk about the setup that I’m using today. So, I’m connected to this iPad pro, 11 inches, latest generation, and I have it connected to this 1920 x 1200, 16 x 10 format projector. Now, the resolution of that iPad 11 inch is almost 16 x 10, and it’s much higher than the 1920 x 1200. So, it fills up this whole screen, look at that, eight feet tall image with just little black bars on the side. We’re not using a pc, we’re wirelessly connected to my iPad pro using a flightscope mevo plus.

I just want you to understand how that works looks like. We can kind of hit a dead straight shot, I mean, maybe we, because you can aim and we’ll just hit dead straight, maybe we drag it just a little bit to the right. Because I can see that just kind of that’s heavy wind. All it takes is a little bit of a crosswind to make a difference, and then we’ll just make a nice smooth 8 iron swing is what I’m thinking because it’s downhill but right into your face that could play really well.

The wind’s still catching it, am I going to be on the green though? All right, two putt for par, not too bad. The wind really caught that thing, all it takes is a little bit when you’re talking 15 miles an hour wind and stuff. And you know, that very well could have had some left sidespin on too, that’s my normal shot is a little bit of a draw. So, makes sense those combinations, I should have tried to hit a fade in there, and kind of cut it into the wind a little bit.

Another cool flyover of this par 4. I need to grab my tee actually, there we go, and I’m playing with the pro v1 with the metallic dot on it. I don’t know if I mentioned that or not. What do we have for wind here? This is interesting, this is the opposite. So, it’s 17 miles an hour wind, we’re going to be able to cut the corner here, I mean that’s blowing hard. So, what do we want to do? Maybe aim over here, it’s downhill as well.

Well, this will be fun. So, 60 miles an hour going that way, 31 feet downhill. Let’s see if I can get this ball flying. It’d be great to hit a little bit of a draw and go with it, but that was a little towards the toe, see it and see with that left spin, it’s going to play so well though it was a little off the tilt. Look how far the ball went with the almost 20 miles an hour when 294 and it was downhill too, that’s awesome. This makes it fun, go out here, and rip a bunch of different shots.

You can watch the video for further details.