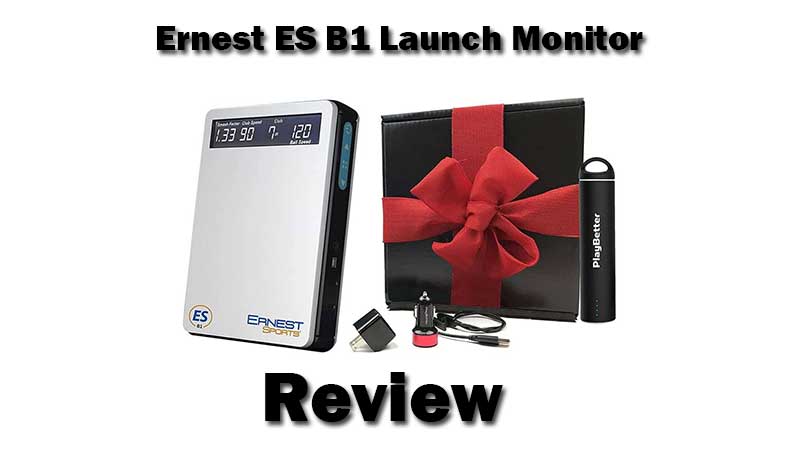 Ernest ES B1 Launch Monitor Review – Today, we’re checking out the new, it’s not that new, but it’s newer from Ernest Sports launch monitor, the ES B1. Okay, I’ve done a ton of launch monitor reviews. So, I always love to see how these things perform. So, I can let you know whether or not, you should drop the cash on these types of products.

Alright, so from earnest sports, here we go. This is retail’s price on this thing roughly 550 us dollars at the time of writing this article. Okay, charge up right here, plug it in eight hours of charge before you use it. They say kickstand, boom pretty simple, power right here. It speaks to you, got some volume here, and some controllers right there, turn around. What is different?

So, this is an upgrade from the ES14 model. Okay, that one, you put it on the side of the player. This one goes behind the player, which in my opinion is the better way to go. I have more confidence in a launch monitor if it’s behind the ball whether or not, that’s true or not, I don’t know, but I just have more confidence in that part. I know, because I just feel like it can see the ball, it just doesn’t go whoosh right by.

It needed the directions for all the programming features. So, you got that, you can change your altitude,  select yard meter program, loft with bag display. You can select the loft of your club, you could tell it, hey my pitching wedge is 46 degrees or 48, whatever it is. If you want to do that, just to give it a little more accuracy. So, you can keep your numbers, better you know in terms of keeping your statistics. All right, so you get it, you can kind of go through that and select everything.

Okay then, what you do is you download your app from the app store, the ES B1 app, and you open that puppy up, and it will ask you to connect to the ES B1 monitor, and we’ve got the number. So, here is what this is supposed to detect, we got club speed, and ball speed very important, spin rate, like that smash factor,  launch angle, and direction. It’ll give me, my distance on here too. I don’t know why it doesn’t say distance,  it’s a smash. So, on the indicator, we’ve got it kind of flashes back and forth. This is just kind of where it is right.

Now, you see, that all right, it’s giving me these numbers, and then it flashes back to some more numbers.  It’s got about six different numbers characteristics. Those are the data points. It gives you along with your carry distance does, it give me total distance, or just carry distance, at least it just says carry on here. So, what we’re going to do is, we’re going to put this to the test versus trackman. Because that’s accurate, we know that, and we’re going to see how accurate is this and is worth the 500 – 550 price tag.  So, we’re gonna hit some wedges, some irons drivers. I want accuracy if I’m paying the money and I know you do too.

So, let’s see how she does. All right, this thing only needs to be about four to five feet directly behind the ball for it to function correctly. Okay, we’re going to start with a pitching wedge. Once it’s connected, it looks like this, and we’re gonna select our club right there, and we’re going pitching wedge, and okay, I’ve got a 46° wedge said that’s way to keep my stats.

Let’s go, distance 117 yards, so that thing it’s cool. It talks to you, it gives you numbers as soon as you hit. It yells out a number. It differs pretty dramatically with trackman. Sometimes, I’ve noticed that these things have a difficult time with wedges, that’s something I’ve noticed. So, let’s switch to 7 iron, and let’s see. I checked it’s set to carry distance that’s the carry number. It’s a little off, okay here’s the deal, hold on to one of the things that could be going on, and this happens with a lot of launch monitors, and it’s just the way it goes.

Now, the spin rate that time, I think it’s the net might have something to do with it. But, it should get club head speed, ball speed, and spin rate pretty accurately. Well, should pick it up right there. Now, let’s go to the driver, and see what our numbers are there. Okay with the driver, it’s not giving me carry. It’s giving me total distance.

Now, with the driver, not bad, not great, but not horrible. Okay, here’s what I feel, I owe you the opportunity to see this performance at a range up against Trackman. Both at a range and see what numbers we get there. This was in a net, maybe it needs a little more distance to really get at more accurate readings. I don’t know, because it shoots out a number as you hit it, and then it gives you a number like it’s instantaneous where even Trackman has to think for a couple of seconds before it gives you all the numbers.

But, what we’re gonna do? Now, let’s go to a range outdoors. We’ll hit some balls, have them both out there, and see if what is saying is accurate Trackman, this everything outdoors. Okay, we’re at the range, here’s what we got, we have Ernest Sports, it’s gonna be set up four feet behind the ball, just like it’s supposed to be. There’s a green flag out there, 164 yards to the green flag, the blue is like 105. So, in between is like 133. So,  we know the numbers, got the laser, got the trackman, got the Ernest sports, we got the pitching wedge, and I’m just setting everything zero altitudes for trackman, checking altitude here is zero, everything’s zeroed out temperature it’s like 77 degrees. Okay, we’re good, I even brought some other launch monitors, just to compare if we need to.

Here we go. Honestly, like those numbers, were really good. They’re spot on, they weren’t exact but they were close enough, it wouldn’t matter. That was pretty good. Here’s what I’m gonna do, I’m gonna just mess around, hit a bunch of balls here, set up the other ones, so I could compare to Earnest Sports, and then we’ll go back, and I’ll give you just all the information.

So, one, I like the fact that it’s a larger unit that just gives me a little more confidence. It’s got radar and detection capabilities that are going to pick stuff up. It did a very good job, outdoors versus indoors or not indoors, but in a net. I felt the numbers were much more accurate outside, and it did work in the net. However, I just didn’t trust the numbers as much, and they were very different than with trackman when I compared it with the other units that I use, and have done reviews on.

So, I did like that as far as weight. It’s got a good weight to it, it’s not light. However, it does feel kind of like a toy. It feels a little cheap plasticky, to be honest with you. However, I do like the fact that it sits behind the player as opposed to off the side, which I like, also I like the fact that it didn’t struggle with the different drivers that I hit. So, didn’t have a problem picking up the composite heads of the different types of drivers,  other ones have had an issue with that.

Also, with these cheaper models, we just don’t know where what part of the clubhead is picking up. The toe is gonna move faster than the heel whereas trackman. I mean, you’re paying for them to pick up the center of that clubface, so it does a pretty accurate job there. I like the numbers, it gives you kind of simplifies. You’re just dealing with certain parameters, you’re not getting too in the weeds with stuff you really don’t need. I mean, I don’t really look at spin rate, it’s not important to me. I’m looking at the trajectory, I’m looking at maybe launch angle, really.

With the portable ones, I want to know swing speed, carry distance, total distance. I don’t care, even about my smash factor. Like I know, if I hit it good, or if I hit a bad. So, I don’t really look at that number. I only want those three things. However, it is a good unit. I like that it has a display, and you can use the app, and it keeps track of all your stats. There’s a lot of good features it does. So, it is something to consider.