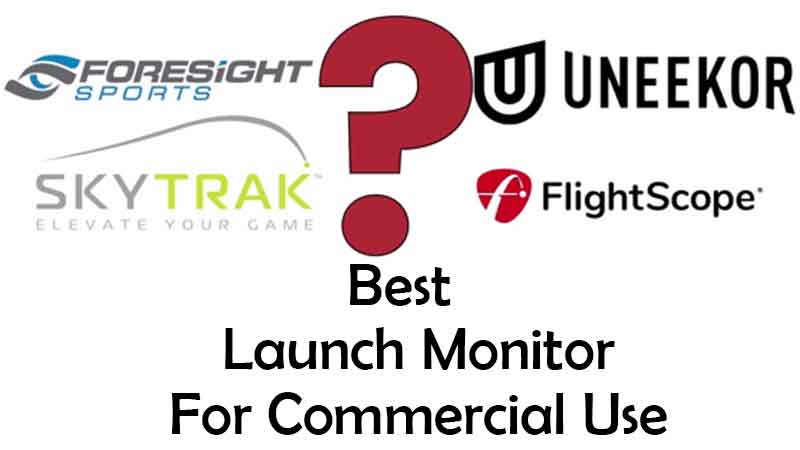 Especially in the upper midwest, where you get snow, and stuff all year. So, there’s a lot of options. We talked to a lot of people from Canada as well. So, there’s a ton of options when it comes to simulators. We talk about these things all the time, we’ve done videos on well pretty much everything here except for the foresight products, which we’ll get to, soon. But on the table, I’ve got a GC2, GC Quad, a Skytrak, and a flightscope Mevo,  great options.

They’re all fantastic for commercial use. I think there are better options out there. The reason being these all sit on the floor. If it’s photometric or stereoscopic like the GC2, GC quad, and Skytrak, they’ll sit beside the golf ball. So, if you’re in an indoor facility, you’ve got random people coming in playing golf, you never know what their ability is. We get shanks, they bounce off the launch monitor, you’re out 10 grand. Unless it’s a teaching-specific facility you know exactly who’s coming in.

I typically wouldn’t recommend those for a commercial space. The other option that goes on the ceiling would be Uneekor EYE XO, a Uneekor QED. I’ve got both of them mounted here in our warehouse. We did an EXO video, so you see a little bit of how that runs, and how it works. QED is very similar. I’ll talk about the differences between those here in a minute, and run through that. And we’ll also break down prices, and kind of, give you an idea why I select.

I think that they’re fantastic, so other things to consider in your commercial space is what kind of use is it. Are you doing club fitting? Are you doing lessons? Are you just wanting people to come in, have fun and play golf? that’s another thing for the Uneekor. Another check that I go towards the Uneekor because they’re compatible with almost any playing software, and with the EXO, you get a lot of the similar data, you would get to say a GC Quad or a Trackman for half the price.

So, I lean big time towards. The EXO for fitting in commercial space one because it’s cheaper. Two, because it’s out of the way, it’s mounted. You don’t have to do anything, you just reach up, and turn it on, and you’re good to go.

When it comes to software, Skytrak, Mevo plus, can run several different software whether that’s E6 connect, TGC. Skytrak also has WGT, it’s a single-player only. So, it’s not the best choice in that. Foresight can do E6 or FSX. Uneekor can do a lot, it can do creative golf. Skytrak also does creative golf, it can do E6, it does TGC, and then like GS pro is another one that’s starting to come out.

So, I think that in commercial spaces TGC is a great software for those reasons. Because there’s a lot of golf courses on them, they might not all be perfect, they might not all be the best-built golf courses in the world,  but 95 percent of golfers aren’t going to know that first of all. Number two, there are still really good renditions of the course, because they’re user-made. They’re still really good renditions, and people remember a lot of stuff when they play golf.

E6 is fantastic, it’s great gameplay, it’s got good graphics. But the courses are limited, and I think that’s part of it. For me, where I select TGC, I think the gameplay is probably a little bit better on E6, but I prefer TGC because I’m a golf junkie, and I want to be able to play valley bunion, or wherever whenever I want.

The other thing I want you to see with the Uneekor software that we haven’t set up yet, but we’re going to set it up. You can also film your swing on those. So, if you do have a commercial space, and you do want to teach with them, you can set up cameras, and actually film your golf swing during your lesson and stuff. So, there’s a lot of perks to that QED or the EXO that a lot of the other systems don’t have. You know with the Quad, if you want to film your swing, you have to have another software to run it. The EXO, the QED you can run on the software that comes with it.

Another option you might think about for commercial space would be one of these controllers. We’ve got Roxor golf, these things are fantastic as well when it comes to controlling stuff, for you know, your TGC or E6 make this a lot easier. So, you don’t have to have people going back and forth to the computer, you can put this on the table behind you, and they can aim with it. They can do whatever they want. These are great options for something to think about for a commercial space. They’re relatively inexpensive.

Best Launch Monitor For Commercial – So, if I was gonna set up an indoor space, or an indoor facility, or even a teaching facility, I’m gonna go for the Uneekor options. I think that is number one. They’re more affordable. Number two, they’re more malleable as far as software and stuff like that. Goes number three, they’re up to out of the way, so that for me makes a very big difference when I’m going to get 97 – 98 accuracy, out of those things as compared to a Quad or a Trackman. And they’re really half the price, so I compare it with TGC. I compare it with E6.

Those are great options, but they’re out of the way. They’re just fantastic, I love them, I use them every day, and I play on both of them. I use the QED and the EXO obviously the EXO, you don’t have to have the marked balls and stuff like that. It does have the cloud, but with the QED, I don’t have to do any of that stuff. I just have the QED balls there, and I just hit balls. It’s also mounted 3.5 feet behind me, so the EXO is mounted 3.5 feet in front of me.

I don’t need all that stuff if I’m just playing golf, if I’m having fun with my buddies I take QED’s all day. I don’t worry about what kind of ball it is, if they want to bring a ball in, and put stickers on it, or something they can always do that, but Uneekor is great for commercial spaces. I think they’re the best simulators out right now for commercial spaces because they’re affordable and they’re very good.